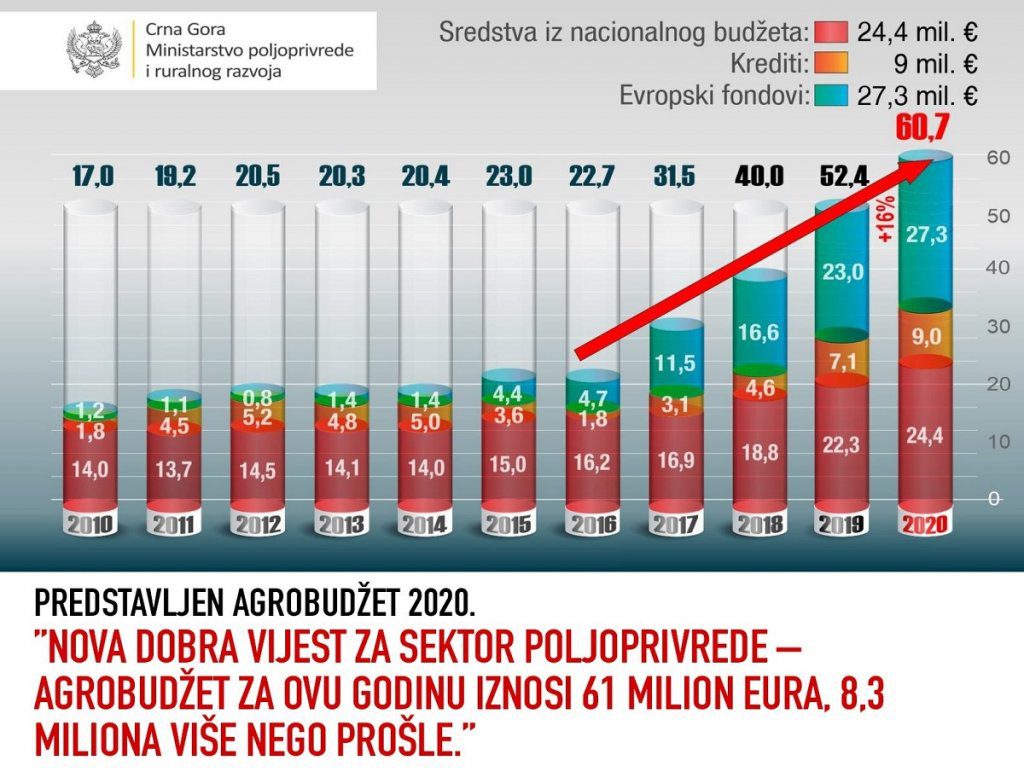 Presenting this year's Agrobudget, Deputy Prime Minister and Minister of Agriculture and Rural Development Milutin Simovic, MA, said that such generous funds were only one of the concrete results of Montenegrin economy achieved growth, the progress made in EU integrations and responsible policy implemented by the Government of Montenegro. Deputy Prime Minister in his presentation emphasized that this year's Agrobudget is householdly, european and developmental. 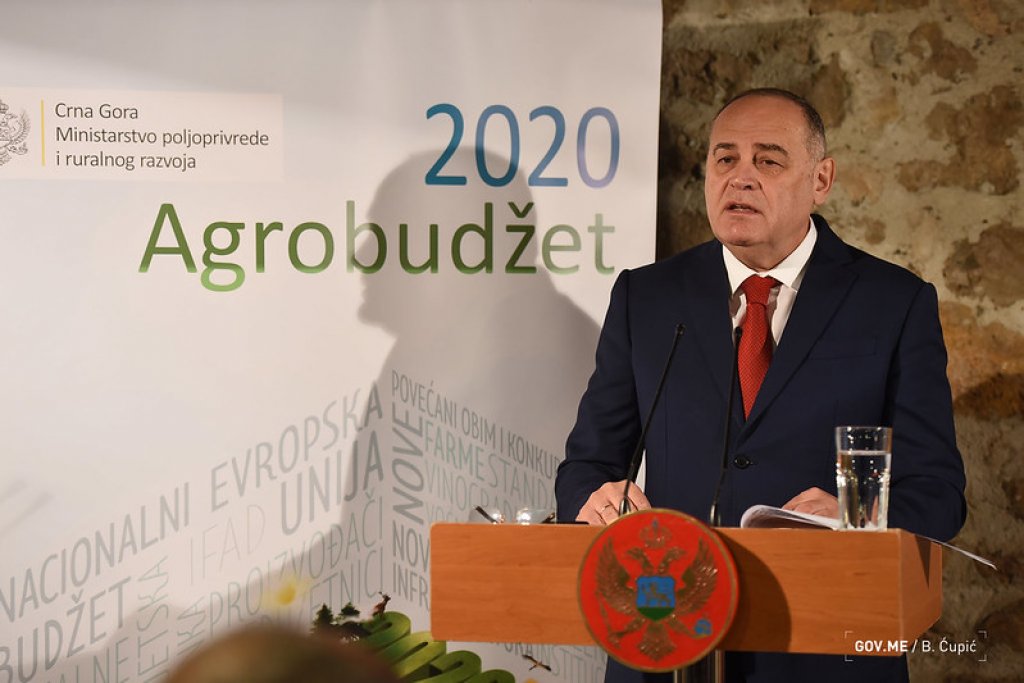 The created Agrobudget measures, combined with the participation of farmers and entrepreneurs, and local communities, this year alone will result in realized and initiated investments in the amount of around 100 million euros.

“We know what we want - successful hosts and successful entrepreneurs. We have a strategy how to support them and we have more money for it year after year. Best evidence for this are numerous new production and processing facilities across Montenegro", said Simovic, who gave a presentation of the Agrobudget for this year at Mladen Rakcevic's winery in Riječka nahija, the Capital of Cetinje.

Within the Agrobudget structure, three areas of support are identified : agriculture, fisheries and operational programs. A total of 57 measures were defined.

For food safety, animal health, phytosanitary measures and capacity development in these important areas, the 4.2 million euros are allocated, or 50% more.

For direct payment 6 programs were defined in the amount of 8.2 million euros, which is an increase of 1.1 million compared to last year. 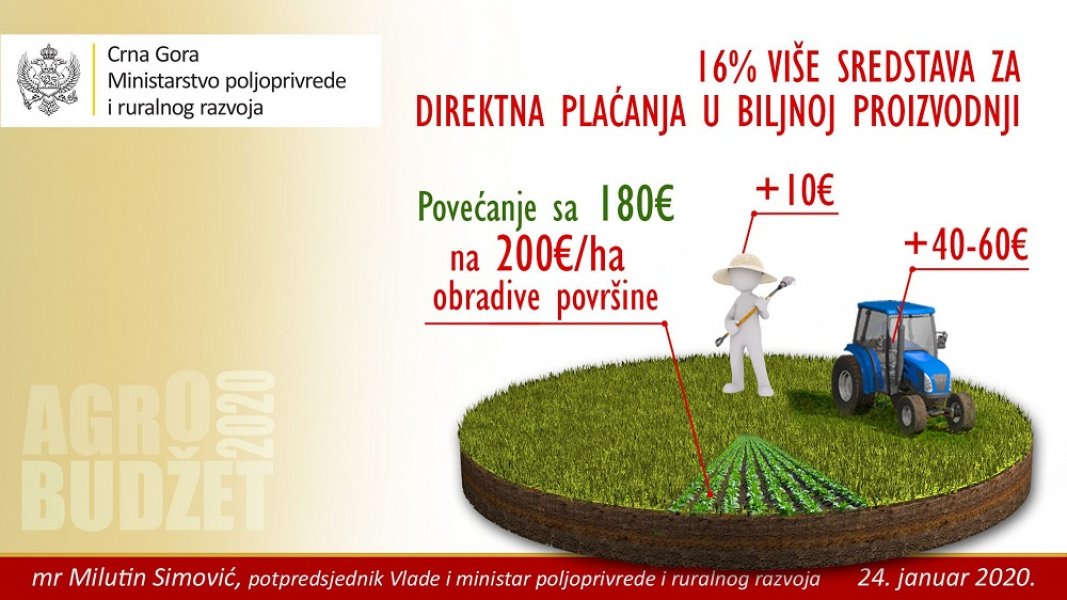 This year also continues with a wide range of users in livestock and plant production.

“We have increased the amount of funds allocated for livestock premiums from 3 to 3.5 million euros. The holdings that receive the right to premium per cattle head from this year receive a premium for each cattle head, not just for the cattle head beyond the stipulated minimum. In this way, we responded to the long-standing demands and expectations of farmers to cover all farms with premiums", Simovic said, adding that the small farms would benefit the most from this newness. 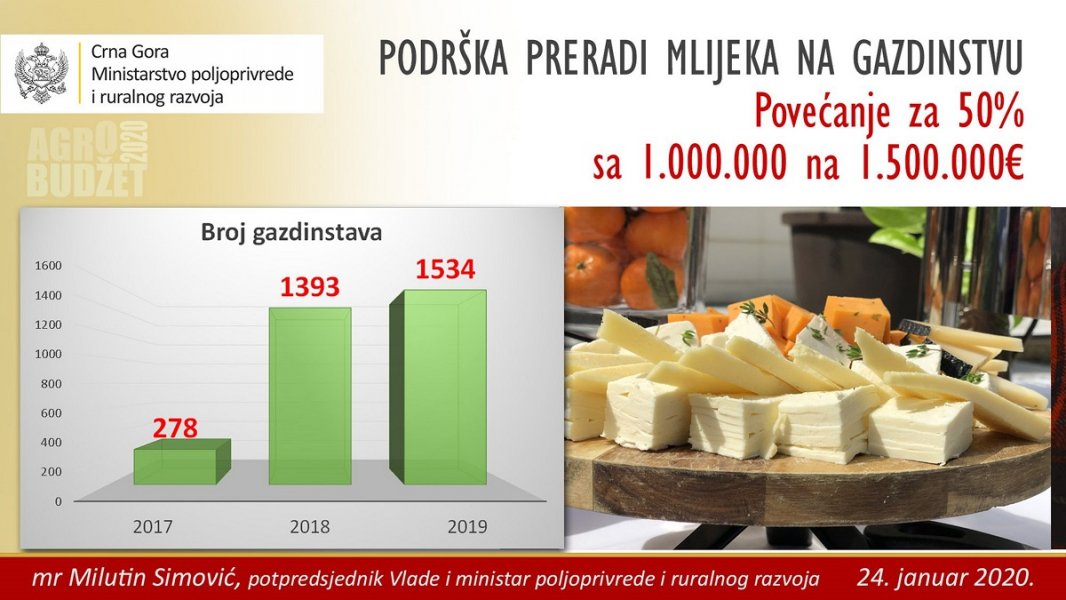 The newness is that from middle of this year, support funds will be paid directly onto manufacturer's bank account, which has been their increasingly common requirement. In this way, according to the Minister, milk producers will know the amount of premiums they receive from the state and the amount they receive from dairies.

Encouraged by the results in previous three years, milk processing on farms will be supported also through Agrobudget this year, with a simplified application procedure.

16% more funds were provided for Direct payments in plant production. The amount of subvention has been increased from 180 to 200 euros per hectare of arable land, or 210 euros for young farmers. 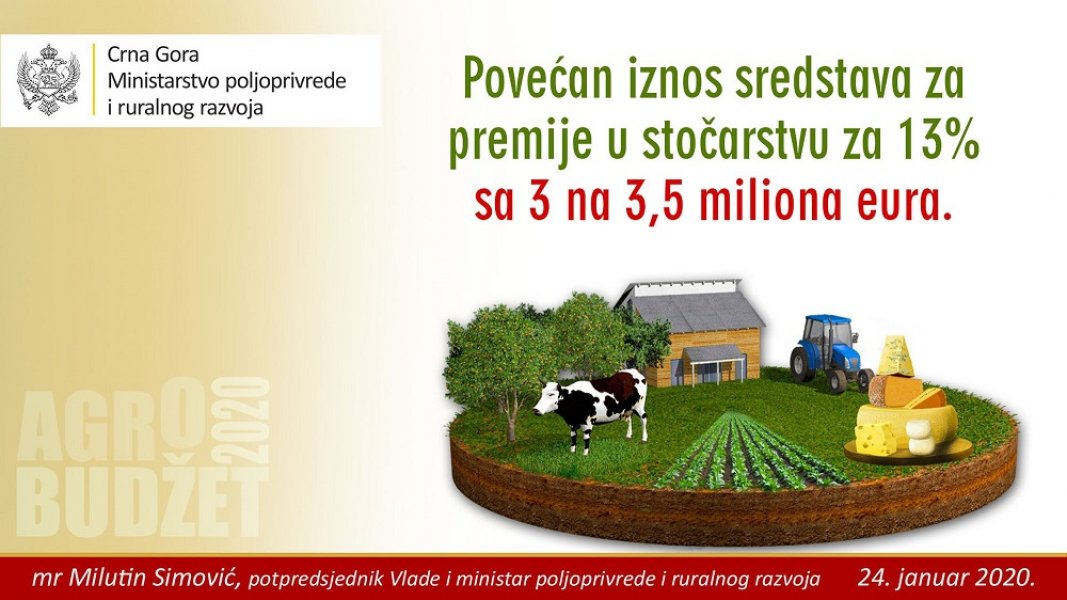 Simovic recalled that late last year, the Government, through a proposal to amend the Excise Duty Law, proposed that farmers should be exempted from paying excise duty on fuel at a registered agricultural holding.

"This way farmers will receive additional support of 40-60 euros per hectare", Simovic said.

Support for beekeeping has increased, with 400,000 euros committed this year. 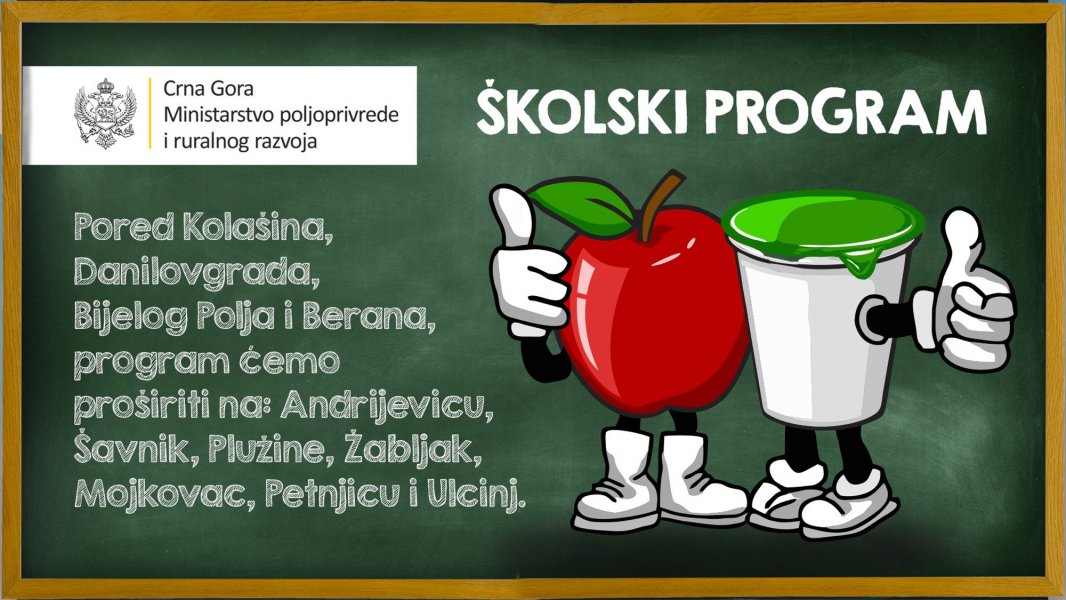 The school program will include seven other municipalities

Through the School Fruit, Vegetables, Milk and Dairy Program, which has proven to be very successful in the last year and contributes to healthy eating habits for children of lower school age, from next school year in addition to Kolašin, Danilovgrad, Bijelo Polje and Berane, the program we will extend to Andrijevica, Šavnik, Plužine, Žabljak, Mojkovac, Petnjica and Ulcinj.

Recalling that past year was marked by contracting and beginning of  projects implementation under the IPARD program and that 264 projects are contracted for two measures, Simovic said that this year a great investment momentum is expected, through the completion of the started projects and payment of support, contracting of new projects for public calls that have been completed or being prepared for publication.

"At present, investments of over EUR 25 million are realized through the IPARD program alone, with a grant of around EUR 10 million", Simovic said.

He also stated that through the second public call for processing, at the very end of last year, 52 requests were received, investment values ​​exceeding € 38 million and expected grant support of about € 16 million. He said that administrative review of the requests are underway, followed by field control, contracting and the start of a new, second major investment cycle.

Simovic recalled the announcement that a second Public Call for Support to Primary Production will be published in February, which will be the third major new investment cycle.

"We can announce with great certainty that in the middle of the year, after receiving accreditation, we will also announce the first public invitation for diversification of activities, which will be the fourth major new investment cycle," Simovic announced. 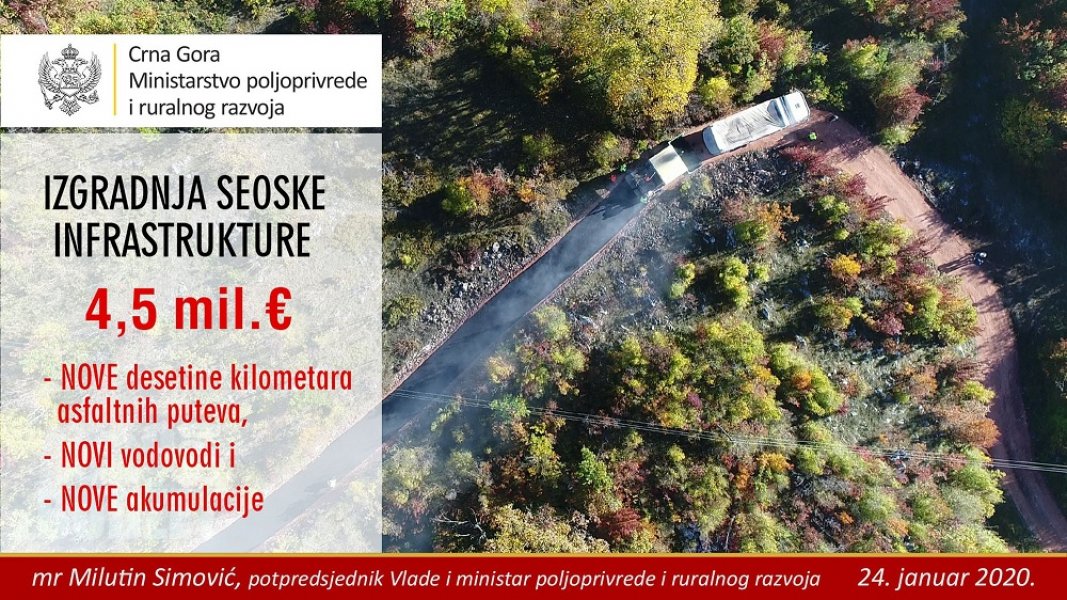 A call to farmers to seize support

Simovic urged farmers to take advantage of generous support measures and new opportunities, noting that they are encouraging an increase in interest from year to year to support viticulture and winemaking, fruit growing, mechanization procuring, vegetable growing, livestock procurement, milking equipment…, with additional support for young people and women and those who are insured on the basis of agriculture.

“As you can see, there are numerous opportunities for significant support across the farm. Support for young farmers remains one of the priorities with a grant of € 10,000 per beneficiary”, Simovic said.

For this year, Simovic also expects the accelerated implementation of the MIDAS 2 program through support for procurement of equipment for the Fruit and Olive House projects, as well as support for the implementation of numerous other activities planned under this important project, which is being implemented with the World Bank.

The 2020 Agrobudget also means continued strong support for rural infrastructure construction. Together for this purpose, the Government, the IFAD International Fund for Agricultural Development and local communities will invest around € 4.5 million. "We will build tens of kilometers of new asphalt roads, new water supply systems and new reservoirs", Simovic said.

For the mandatory animal health program, Agrobudget has received € 2.34 million, or almost 45% more than last year, to meet the increasing global challenges of animal diseases.

“I am sure that valuable farmers and entrepreneurs in this year's Agrobudget will recognize their new good opportunities and will use them to improve their competitiveness and capacities, adopt new quality and safety standards, win new markets, create new and secure existing workplaces and contribute to the overall economic growth and improving the quality of life”, said Simovic, pointing out that the Ministry representatives will continue to be with them on the ground, that their voice will be heard and understood, and that we will look forward to new steps and new victories together.