The cave above the Devil's fiery is the largest and most beautiful cave in Montenegro with a significant potential for further speleological research. It is located in Djalovic gorge, untouched nature, which, due to its features, has been declared a natural monument.
Đalovića cave was tested in the length of about 17.5 km, and the Study suggested that the decorated tourist part be slightly over 814m with nine halls and ten plateau for visitors, as well as to be built and put into function of the cableway from the Podvrh monastery to the cave itself. A few years ago, the Government adopted the Tourism Reform Agenda with a clear commitment to merge the supply of the North and the South, presentation of Montenegro as a unique tourist destination. Completion of the Study of the Economic Justification of the Tourist Valorization of Đalović Cave with the conceptual design of the part of the cave. Following is the development of the main project on the arrangement of the Cave.
So far, the completion of the main project for construction of the Bistrica-Monastery Podvrh road of 5.5 km has been completed, which represents the first step in its valorization. Its estimated value is almost 4 million euros. In addition, the construction of the cableway from the Podvrh Monastery to the Đalović cave itself is planned, with a transport of up to 75 passengers per hour. The estimated value of the cableway is close to 4 million euros.
Total investment with cableway and road is projected at almost 12 million euros, while the projection of the number of direct employees of this project is 60.
Considering the planned period of operation of the Cave, capacity for the eight-month season during the year is estimated at 158,000 visitors, but the analyzes show economic justification, but with about 55,000. It is estimated that the complete project will be completed in four years, and only the arrangement of the Caves will be completed in just over a year.
The cave above Vražji Firov consists of a large number of canals, corridors and halls which, according to the position and general morphological characteristics, can be divided into several parts: "Channel with lakes" (characterized by a large number of lakes, both permanent (about 15), and occasional (20-30), as well as stalactites and stalagmites of small dimensions), "Big Maze", "Big Channel" and part of the cave in the continuation of the Great Channel that is separated by the traps - "Channel behind the siphon".
The easiest way to get to the cave can be from two directions.
One is the Bistrica valley to Podvrh Monastery, 24 km from Bijelo Polje. The path then goes upstream with the Bistrica River and a dry gully of 3 km long climbing, and hiking takes about 2 hours.
The second direction is from the village of Đalovići, which is 48 km from Bijelo Polje. The walking path from the village leads to the dry part of Đalović gorge. The difference in height between the gorge and the surface of the village of Đalovići is about 450 m.
Upstream through the Djalovica gorge, on the left side of the valley, at the place where the valley connects with the hill, the lowest of the four lakes, there are Vrazji virvi.
For now it is possible to enter the cave only with the assistance of professional guides, using the complete equipment. It is possible to organize entry for a maximum of 10-13 persons in the same time interval.

Caves of the caves Devastating sources: 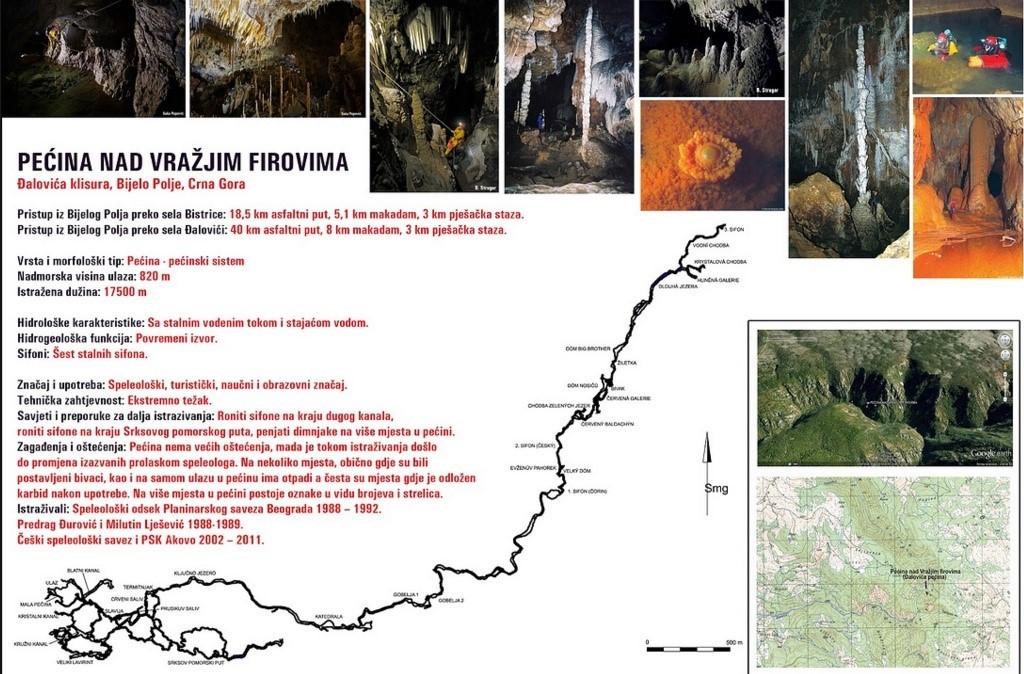 This development project is one of the most important capital investments that are being implemented in Bijelo Polje, with the continuation of quality cooperation between the Municipality and the Directorate of Public Works. According to the project documentation, the construction of the road towards the top of the mountain Bjelasica is planned from the main road, the installation of a cableway - gondola, road immobilizer, etc., which would mean opening the heart of Bjelasica from the Bjelopoljska side.
The project envisages facilities for summer and winter tourism, from marking hiking and cycling trails, eco-parks and villages, livestock and farmer farms, construction of katunas as seasonal settlements, which will create and improve healthy food in sub-Bjelica villages sustainable, competitive development, primarily for the benefit of the local population.
For the tourist offer, the northern part of Bjelasica, which belongs to Bijelo Polje, will be opened at the foot of Turjak, which lies at an altitude of about 1900 m and Cmiljače at 1600 m / nv, with total area of ​​7.5 hectares.
By realizing this investment, Bijelo Polje will become a recognizable tourist and recreational area of ​​Montenegro that will integrate with other areas in the north of Montenegro, alongside the world's best models for development and management of mountain areas that attract tourists and residents throughout the year. Using tourism as a generator of development, this space will become recognizable through the smart and active use of other mountain potentials, thus achieving a balanced economic structure with agriculture, wood industry, small business, culture and other public services.
This is not only the opening up of tourism potential, but also the opening and agro-tourism of Bjelasica, and we believe that this project will most directly influence the overall economy of Bijelo Polje, the gross domestic product in all areas, directly affect the reduction of unemployment and a different perspective of young people in Bijelo Polje .
First plan of the special unrivaled Bjelasica and Komovi was completed, and then preliminary designs were made. The places where resorts and paths will be located are precisely defined. Also, the realization of this project from the Bjelopoljska side will at the same time mean connecting with the Kolašin, Mojkovac, Berane and Andrijevci sides and through this project the concept of development of this mountain, which implies several trails that will be interconnected.
With the Government of Montenegro and the Directorate of Public Works, the agreement was reached that the opening of the Bjelolasovo side of Bjelasica, with a total value of EUR 25 million, will be found in the capital budget of the state, with the sign of financing until the final realization of the project.